So I was playing Doom3, an old favourite. And I came upon this screen: 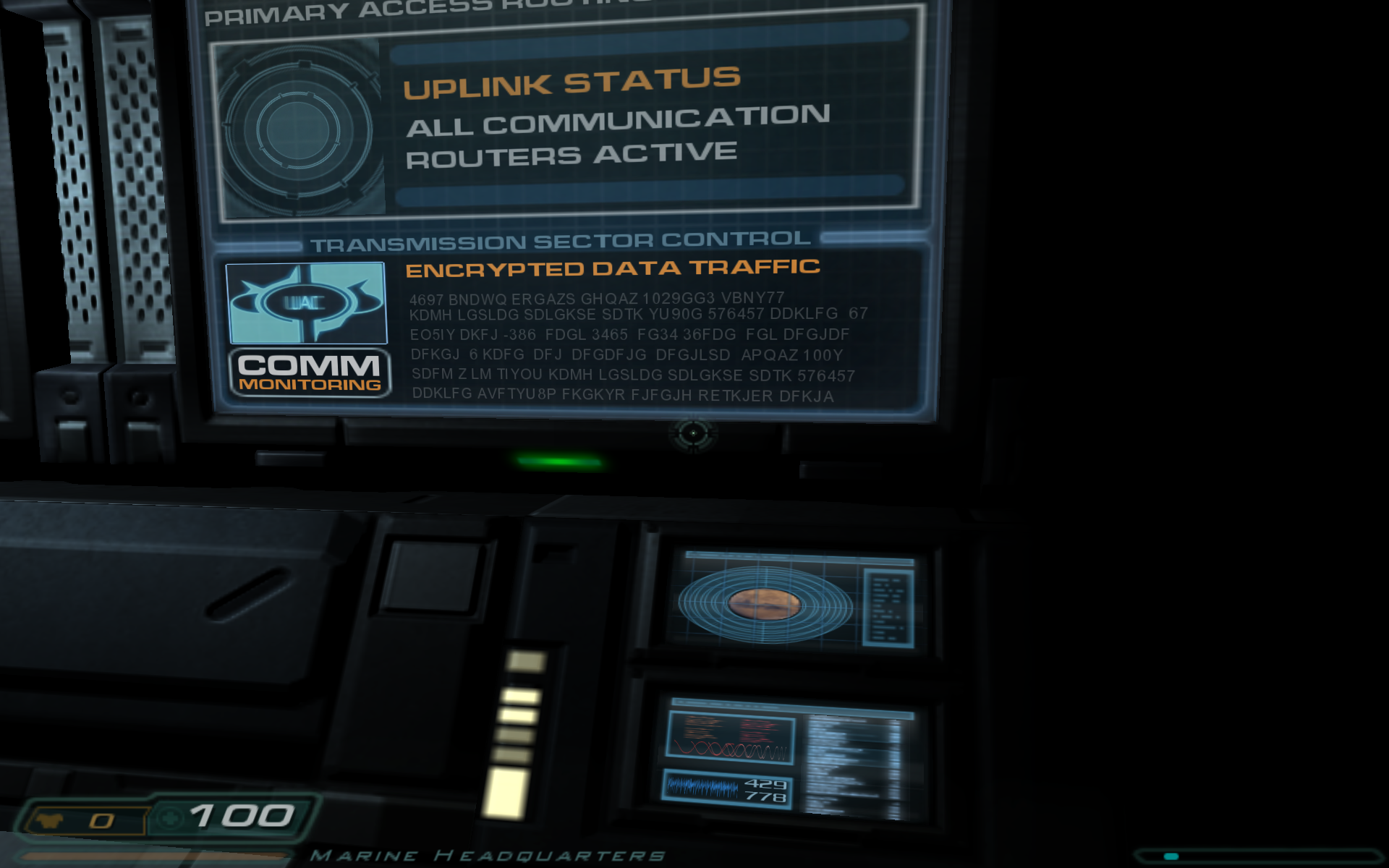 The “encrypted” data is:

It didn’t look random enough to me, meaning it was possibly encoded, so I started poking at it.

The first thing I tried was ROT13, but that wasn’t it.

I then tried mapping the alphabet to the reverse alphabet (my sister’s idea), but that wasn’t it either.

Then I ran this PHP program:

And the output was:

And this report was enough for me to deduce what had happened. This was obviously the work of a busy designer entering “random” data from their QWERTY keyboard.

You can tell because all the frequently occurring letters D, G, F, K, L, etc. are all on the home row on a QWERTY keyboard. Someone sat there pressing “random” keys. It’s not an encoded message.

Puzzle solved. But a little disappointing.

I just spent a few days trying to get over 500,000 points in The Lost Viking game in StarCraft 2 so that I could earn the Gold Level achievement and round out my profile as 100% complete. I’m pathological. It’s a curse. I played and played and played. For days! (It actually took me a few years to get around to it. For a long time I had decided that for me it was too hard. I couldn’t even get Bronze Level. But when I was sitting on 99% completion I simply had to find a way…)

Eventually I took stock of the situation and realised that the reason I was having so much trouble getting the high score was that my strategy was flawed. The major problem I was having was that I was using the Plasma Canon x2 rather than the Side Missiles x2.

Without thinking very hard about it I just decided that it would be better as a general rule to use the more powerful weapon, the Plasma Canon. But it’s not. It’s considerably more efficient to use the Side Missiles than the Plasma Canon. It wasn’t until I switched strategies that I could finally get the high score. Please consider the following explanation:

The amount of damage that you need to inflict on a (non-Boss) target varies from say 1 unit to 50 units depending on the unit type. The most common unit types only require 1 or 2 units of damage to kill, but there are some stronger units. Let’s say we’re dealing with a median case of 1 unit damage to kill and we fire either Level 2 of the Plasma Canon or Side Missiles:

Drones are pretty handy too, so always try to get at least x1 Drones. If you decide you’d like to run with only x1 Drone and try to collect more bombs then that’s a respectable choice. Personally I try to run with x2 Drones because I get the extra 1/2 point damage per unit time and have a higher chance of having my life saved by it. But, up to you. I guess if you wanted to ignore Drones altogether in order to get more Bombs that could also be a valid approach… but I like x2 Drones.

So since the goal is to max out Drones and Side Missiles as soon as possible, what should you get first? On this decision I decide to take whatever I can get sooner. I just take whatever is available as soon as I can. Sometimes it’s easier to get max Side Missiles before Drones, and vice versa. I don’t think it’s too important. It’s hard to make a quantitative judgement. With regard to damage per unit time you are probably better off getting your Side Missiles first, so you can deliver more damage sooner. But, how do you weigh the possibility that a Drone might save your life? If you have a Drone it might turn out that it sacrifices itself to save your life, in which case having it would probably have been better than delivering more damage. Also the Drone seeker missiles can help clear out your bottom corners before enemies that arrive there can fire at you, and that’s worth something. So my rule of thumb is just to take whatever Drones or Side Missiles I can get as they become available. If I can’t get one thing easily I will wait until it turns to something else that I can get easily, and if the power-up is about to cease changing and become something I don’t want then I might use a Bomb to clear a path to it before that happens (more on this point below).

As a general rule I try to max out my Side Missiles and Drones before collecting Bombs. That’s because I pretty much always have a few Bombs up my sleeve so it’s better to get the other upgrades working for me and delivering more damage per unit time on the screen sooner and thus for longer. So the goal is definitely to collect as many Bombs as you can, but try to max out your Side Missiles and Drones first. Also, having Drones first is pretty handy if it turns out it saves your life when you stuff up your navigation! Bombs are similarly life-saving: never be afraid to drop a Bomb if you’re cornered, that’s what they’re for! Bombs are pretty much as good as an extra life if you just recognise your imminent danger and press that Ctrl key in time. Always prefer to “waste” a Bomb than risking a Life, Bombs are much easier to come by! (That said, always try to save a few Bombs (say 3) for taking on the Terra-Tron at the end of every 3 levels.)

If there is a power-up on the screen but it’s hard to get to it in time because there are too many enemies or enemy missiles in the way, then drop a Bomb and go straight for it to make sure you get it in time. It’s always better to drop a Bomb to get a power-up that you would otherwise miss, even if that extra power-up is another Bomb! If you lose 1 Bomb and gain 1 Bomb you lost no Bombs and get the points for the power-up that you would have missed if you hadn’t used your power-up. If the other power-up isn’t a Bomb (i.e. it’s a Side Missile or Drone) then it’s good to have it (and the points you get for it) rather than missing it because you wanted to save a Bomb. So spend Bombs to get power-ups if necessary (i.e. if you can’t get it without clearing the way with a Bomb, obviously if you don’t need to clear a path to a power-up with a Bomb then that’s better.)

You can maximise the efficiency of your Side Missiles by trying to stay approximately in the centre of the screen both horizontally and vertically. It’s tempting to keep navigation simple by playing in “one dimension” from the bottom of the screen and only moving left or right. But with Side Missiles it’s better to move in two dimensions and spend as much time as you can in the vertical centre by moving up and down. This is especially true when there are powerful units (like Science Vessels or Swarm Hosts or Battle Cruisers) that arrive in twos, one on each side. If you stick in the middle horizontally and vertically when fighting these guys then you will be delivering maximum damage because you will be hitting each of them at the same time (and your front guns will be clearing out whatever arrives in the top-middle of your screen too.)

So, here are the rules I follow in summary: