This is a part of the homework feature of my blog, which is an ongoing conversation with my mate S.F.

Thanks for hanging out on Christmas day. It was lovely to see both you and $YOUR_DOG. <3

Here is our latest homework.

I mentioned the “defence in depth” on my network, that looks like this: 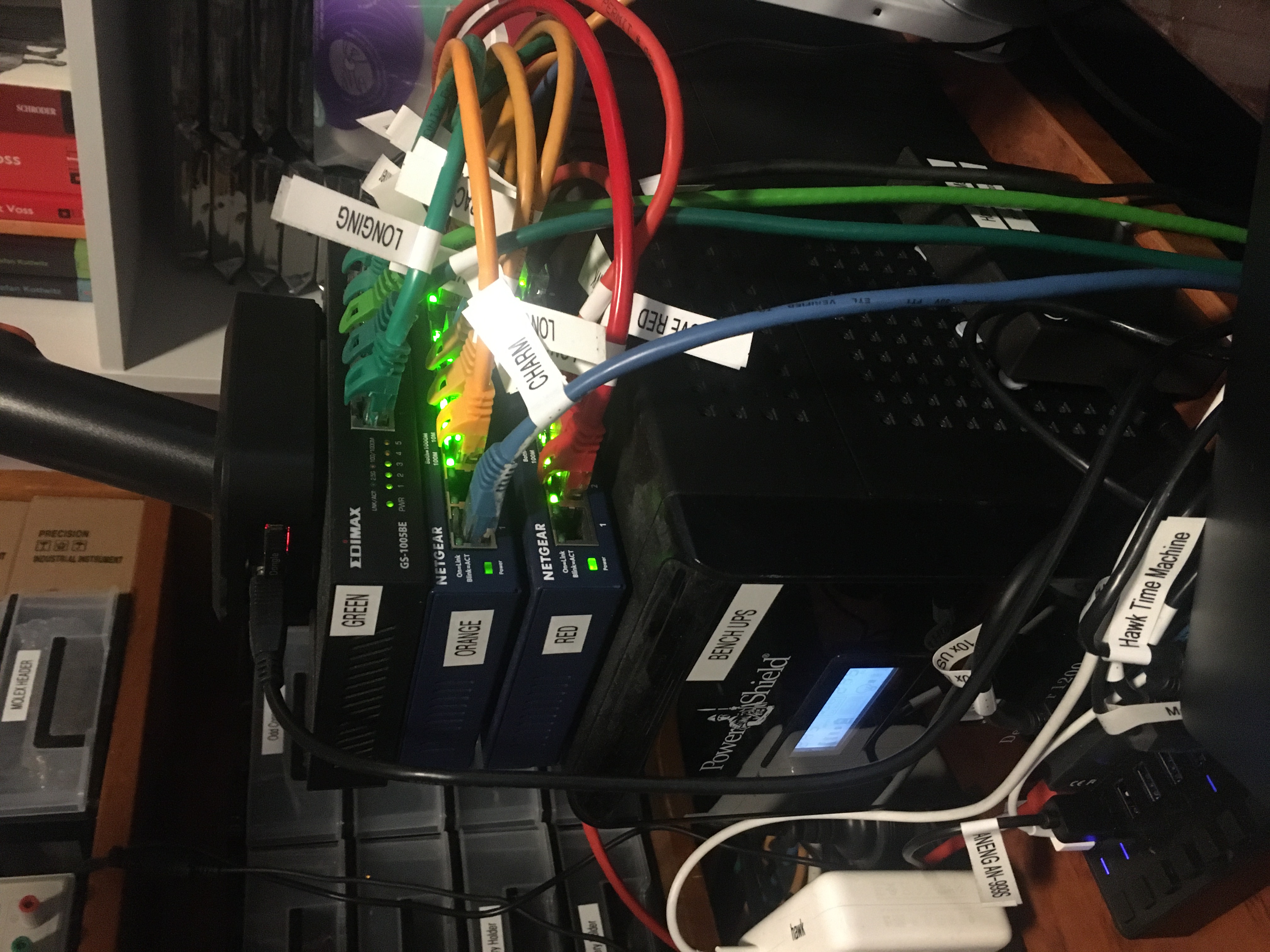 The equipment on the top of the stack is an Edimax GS-1005BE, which is a 5-Port, 2.5 Gigabit switch. If you can make your way onto my GREEN network, let me know how, and I will shout you a steak dinner and the accompanying beers. :)

As you mentioned Western Sydney University started life as a federation of various smaller colleges. This genesis is documented in the opening section of the Wikipedia article.

There is atheist and agnostic, but I wasn’t able to find something different which meant ‘neutral’, unless you were thinking of secular?

So this bloke John Perkins wrote a book called Confessions of an Economic Hit Man which was published in 2005. It talks about how a number of small countries were swindled out of a bunch of money. (I discovered while digging up the book link that he has since published another book.)

The movie The Report is a look into the use of torture by the CIA. I’m no expert but I believe it is the Geneva Conventions that make this illegal.

You should be aware of Kevin Rudd’s new book: The Avoidable War: The Dangers of a Catastrophic Conflict Between the US and Xi Jinping’s China. I have read that book and I am pleased that Rudd has a strategy to help these nations avoid that horrible prospect. I for one am pleased to hear of Rudd’s recent appointment as Australia’s new ambassador to US.

Both the Arab Spring and Occupy Wall Street happened in 2011.

I mentioned the concept of Ikigai, which loosely translated means “why you get out of bed in the morning”, and is the intersection of your passion, your mission, your vocation, and your profession: 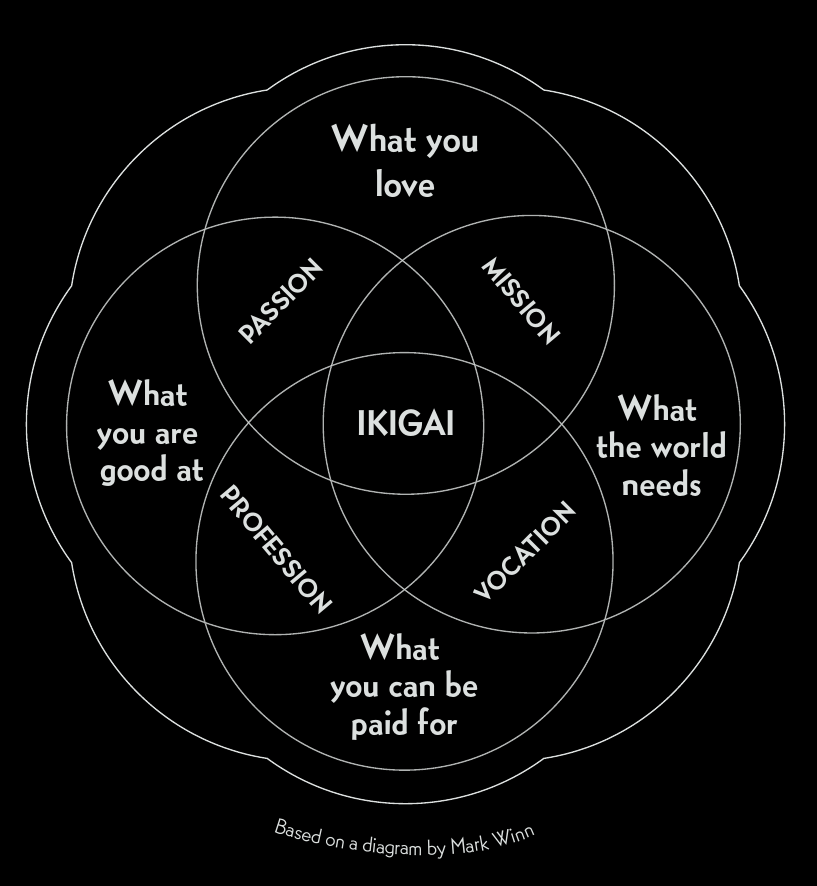 In Japan Moais are social support “clubs” that act as a safety net for members. According to that Wikipedia page “According to research, Moais are considered one of the leading factors of the longevity of lifespan of the Okinawan people, making the region among the highest concentration of centenarians in the world.”

You have probably heard that to become an expert you need to put in your 10,000 hours, but in The 4 things you need to be an expert, Derek Muller lists some additional things:

Definitely watch Ex Machina. I’m surprised this movie came out back in 2014, I thought it was more recent than that. But really good. Check it out. Before you watch Ex Machina you should be aware of the Turing test, which basically means we decide that AI is real/successful if a person can’t tell if they’re talking to a machine or a real person when interacting with an AI. The futurist (and Google employee) Ray Kurzweil believes the Turing test will be passed on or before 2029.

Crypto-fascism is “the secret support for, or admiration of, fascism or trends very closely related to the ideology. The term is used to imply that an individual or group keeps this support or admiration hidden to avoid political persecution or political suicide.” In this case “crypto” just means “secret”, it doesn’t have anything to do with encryption or crypto-currency.

The recent Penny Arcade comic which talks about “business” is this one: A Knife And A Fork.

I have it in my notes to mention my disk configuration for ‘longing’, but I’m not sure why that was relevant. All I can think to point out is that I have 2x 48GB NVMe cache partitions sitting in front of 3x spinning rust disks which are in a RAID1 mirror, meaning I can tolerate the loss of two drives. Also of note is that I’m using zstd compression for my spinning rust disks.

As I mentioned Descartes’ demon is a thought experiment from René Descartes in which he contemplates the possibility that he is being deceived via his sensory access to the world and develops his philosophy of “radical doubt”. Even under radical doubt he concludes that he can never doubt that he is thinking, thus: I think, therefore I am.

The Categorical Imperative is a moral conclusion of Immanuel Kant: “Act only according to that maxim by which you can at the same time will that it should become a universal law.”

I mentioned Outliers: The Story of Success by Malcolm Gladwell. Haven’t read it yet, but do have a dead tree version sitting patiently on my desk.

See you in the next instalment. :)

Hi. I’d like to introduce a new feature of my blog, the Homework category. From time to time I meet with my friend S.F. and we have very interesting conversations. Arising from those conversations is a bunch of homework, which is stuff I have to go home and research based on what came up in our conversation. Usually I just email my friend after our conversation with the homework, but I thought that from now on I would post a slightly edited version of the homework over here, because I think it’s interesting and good fodder for my blog.